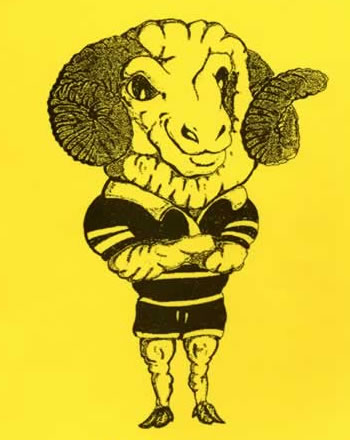 The Spirit of Camden Rugby

Long, long ago in the earliest days of this great land there came a man of honour, courage and virtue. He travelled the countryside until he came upon a special place, a rich and fertile valley. He knew in his soul that this was to be his home. In the challenging times that he lived he became known for his determination to succeed, his passion for life, his gentleness and honesty, and most of all for his unending faith in mankind. When time came for his passing over, his spirit rose and greeted the Lord. And the Lord said unto him.

"Mike, you have done well my child and your spirit shines."

And Mike said to the Lord "Thanks Mate."

And the Lord said unto Mike "You shall remain in spirit and return to your treasured homeland of Camden. In time you will come upon a group of people who gather themselves in the name of Camden Rugby. Their symbol is a sheep, and you shall be their shepherd."

And Mike said unto the Lord "Struth!"

And then the sound of a thousand angels filled Mike with the final words of the Lord "Guide your flock well my child. All the powers of heaven and earth will be with you, and you will succeed. After all, it's for Camden Rugby - it's important."

And so it was that Mike Merino became our guardian angel, the Patron Saint of Camden Rugby, and we became his flock. He is with us always.